Last night was chick flick night.  By default.  And it was marvelous.  I laughed, I cried.  Oh you know the drill.

Funny Girl is home from college and has been just wonderful to me this week.  She’s spend all kinds of one-on-one quality time with me.  This means so much, especially after she and Pensive Girl were gone to Virginia for Christmas.

Fifteen minutes after I got there, Funny Girl called and told me it was chick flick night.  (Read: Mom, my plans got canceled.) So I boogied back home.  Wouldn’t you?  Quality time with a kid home from college?  One who is leaving next week (although I hope she’ll come hang out). We laughed, we cried.  We had fun.  She decided to be my bed buddy (their room is tiny and crowded, and her bed is less than ideal).  We looked at some http://www.damnyouautocorrect.com before going to sleep, and I got to laughing so hard that asthma kicked in.

So, what’s the problem, you ask? Sounds like a good night, right?

The problem is that I didn’t drop everything and gush over Pensive Girl when she got home from work.  She’s been here all week, but she’s felt distant.  Yesterday, for example, as soon as she got up, she left to go see her boyfriend.  I don’t know if the difference this week is that she has a car or if something happened in Virginia that made her keep me at arm’s length.

But last night, I was so happy that one girl has given me so much special time all week, that I felt like acting normal instead of making sure everyone felt exactly as special as everyone else.  It’s normal to want to spend time with those who spend time with you, right?

We chatted some, sure.  And we hugged.  And we talked as best as we could with me sleepy (she got home late) and boyfriend present.

But after pleading sleepy and going to bed, I felt so much guilt wash over me as I was laughing and coughing to the autocorrect.

It isn’t favoritism.  I don’t have a favorite.  But by the time Pensive Girl got home last night, the party was about over.  Still, though, I’m wondering how to fix this today.  Proving that you don’t have a favorite seems contrived.  Hamlet’s take on a woman’s desperate attempts to prove “normalcy” was, “The lady doth protest too much methinks.”

Pensive Girl could have seen through any fakeness.  But I’m thinking I should have done it anyway.  It is the role of a mother, isn’t it?  To make sure no one feels like she is the favorite or least favorite. Even if the effort is ridiculous

Posted in About me, Just Between Cousins, musings, my life, parenting, shakespeare, Uncategorized 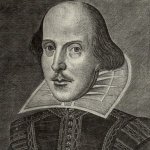 Richard III meets his death with that line.  No one is sad to see him go, really. Not much of a good guy, that one.  But still, I wonder.

Taken out of context, what does the Bard have to say to us today?  I guess this started with the priest’s question on Sunday of “What’s in a name?  Would a rose by any other name smell as sweet?”  If we take Shakespeare out of context at church, where else do we take him out of context?

The other day my chiropractor said to me, “Tell me something brilliant.”  Well, who can think of something brilliant at a time like that?  So, I responded, “Methought I was enamored of an ass.”  He looked at me like I had lost my marbles.  So I elaborated, “A Midsummer Night’s Dream.  Shakespeare.”  He said, “No one has ever quoted Shakespeare to me before.”

That got me to thinking about not only Shakespeare out of context but also of other literary masters from Toni Morrison to Peanuts.  Then today at work, I had to use some horsey quotes for what I was writing, and this one came to me. “A horse, a horse, my kingdom for a horse.”  Ergo, the first “Out of Context” post.

This is my other question:  What literary characters gave up everything in hopes of a better life?  What historical characters did the same.  I’d say Alex from A Clockwork Orange gave it all up to get out of jail.  So did the creeper Humbert Humbert in Lolita. Huck gave it up to travel with Jim, but then he didn’t have much to leave either.  Jim left everything for a chance at freedom when he lost his family.

The Joads gave it up in The Grapes of Wrath and moved to California only to suffer a worse fate.  Or did they give it up? They kept each other.  Even Rose of Sharon learned how to give life instead of take in the end.  I guess the list could go on and even be better researched (or researched at all for that matter).

I don’t think Shakespeare meant all of this with the evil king’s stab at a valiant ending any more than I believe Lord Farquad loves Fiona, but Shakespeare’s words are enduring and they are often worth thinking about.